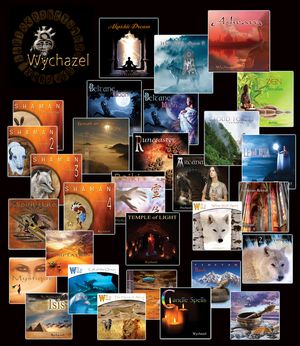 As always, my heartfelt thanks to all of you lovely people out there for buying my music and for your supportive emails and comments. Wychazel seems to have been a popular choice in the run up to Christmas as I have just been told that my Akashic Dream album has scooped the No.1 chart position in the latest MG Top 10 listing. I couldn't ask for a better start to the new year, so thanks again to all involved:-) Celebrations will include several outrageously late tea-drinking sessions with more than a few packets of Hob-Nobs. All being well, 2019 should see the release of 3 new albums from me. The first is a sequel to Beltane Moon (imaginatively named Beltane Moon 2) which is due for release in early Spring. Sometime in the summer, another Native American album will complete the White Wolf Spirit trilogy - no prizes for guessing the title of that one. And after that . . . "Tao - Path of Peace" a meditative album with an Oriental flavour, similar in style and pace to last year's No.1 album Zen Garden. More information will be available nearer the time but, for now, I'd like to wish you all a Hippy New Year:-)